EagleLIFT rehabilitated the soils at Van Nuys Train Station. Read more about it here and our other completed projects. Contact us for more information today!

At the Van Nuys train station in Van Nuys, CA, the maintenance crews were having to deal with a ballast that was continually settling and having to be refilled and regraded.  In typical situations, refilling and regrading a ballast would only have to happen every couple of years, but the Van Nuys track was having to be regraded every 4 to 5 months. After multiple regradings in a year, the maintenance company determined that something more was afoot and contacted EagleLIFT to look into their soils.

10' on center to test the soil's stability and find the competent soil.  The test results were that 320' of track needed stabilization, with blow counts in the center being less than 1 per 10 cm.

Many issues can lead to loss of support soils underneath a rail structure, such as settlement, soil loss into sewer infrastructure, sinkholes, or geological events.  In these instances, the only way to have long-term repair is to address the soil issues.  What EagleLIFT proposed was to use its EL-077 polyurethane to densify and restore the soils' load-bearing capacity at depth. 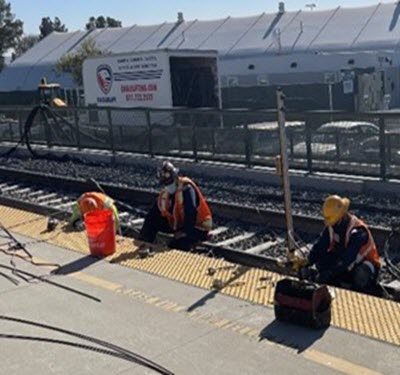 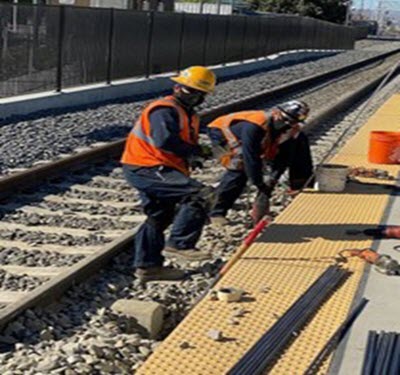 The injection plan comprised of addressing the soils based on their blow counts and injecting at a depth range of 5’-35', with shallower depths at the points furthest from the weakest zones and deeper zones where the soils were the most compromised.

"The plan was to address the soils based on need," states Cliff Frazao, COO of EagleLIFT. "The soils were in terrible shape, and the additional weight of more ballast on top of the continued train traffic was causing the soils to degrade continuously."

Frazao continued, "We determined that an injection pattern that deepened based on soil conditions would ensure the problem source, thought to be an abandoned culvert, would be effectively addressed. The injection pattern would allow the soils to gain a significant increase in densification and load-bearing capacity without the need for excavation or interruption to the Van Nuys Station's operations."