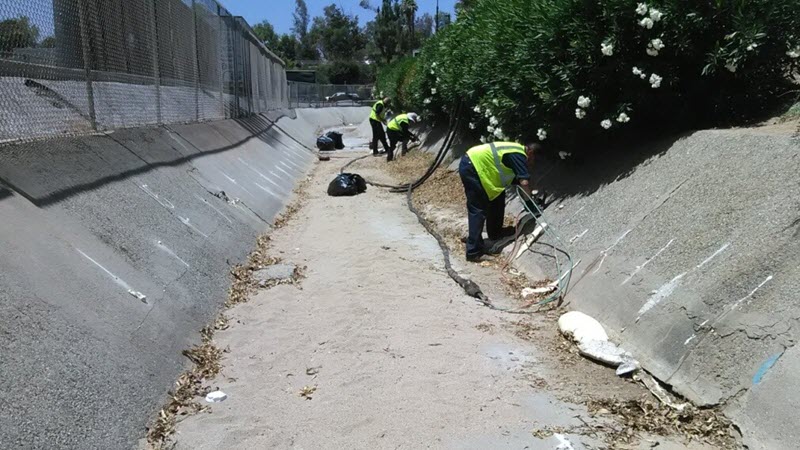 Home About Us Our Projects Riverside College Drainage Channel Repair

Learn about projects EagleLift has been working on including the repair done to the drainage channel at Riverside College in Riverside, CA.

In the southwestern United States, Drainage channels are an important infrastructure tool for ensuring heavy rain events do not cause flash floods and subsequent property damage.  Maintaining these systems is essential to make sure that communities are protected and public works systems, such as roadways, are not interrupted due to washout or pooling water. Riverside City College, located in Riverside, CA, was experiencing problems with a portion of its drainage channel and contacted EagleLIFT to perform the drainage channel repair.

Riverside City College (RCC) had approximately 450 linear feet of its drainage channel that had become undermined by water that was traveling underneath the concrete panels.  The water began to washout the base support soils of the channel, causing voids and settlement along the channel’s bottom and sidewalls.  The College was seeking a cost-effective solution to extend the life of the drainage structure and to avoid the cost of rip and replace.

EagleLIFT recommended and was contracted to inject an expanding polyurethane underneath the drainage channel to stabilize the panels, fill the voids, and seal the joints to restore the water flow over the channel.  The injection approach is a process whereby an industrial grade, high-density polyurethane is injected through 5/8” holes directly into the weak soil zones to stabilize, compact and densify the area.  Once injected, the polymer initially moves throughout the injection point in liquid form, aggressively seeking voids and the path of least resistance, and then it begins to expand throughout the soil media and densify the soil.

EagleLIFT utilized a 4ft injection pattern along the bottom of the drainage structure and half way up the sidewalls.  The pattern design was intended to provide consistent void fill and to adjoin the material to provide effective undersealing of the concrete panels.  Since our polymers are hydrophobic, the material would push out any sitting water and protect the panels against future water intrusion.

All voids under the areas of concern were filled with material usage coming in at 25% under budget.  RCC was able to use the cost savings for additional repair projects that they did not anticipate having the funding to complete.  The project was also completed without any interruption to RCC’s operations.