Read more on the Latest News from EagleLift. Featuring many projects and special events within the company and community including the Vandenberg AFB repair!

In the construction industry, deadlines are a way of life. Whether you are meeting proposal deadlines, managing costs, minimizing weather delays, meeting contract requirements, etc., the clock seems to always be ticking and pressure is continually mounting. However, recently EagleLIFT performed a culvert soil stabilization and slope repair project at Vandenberg AFB that, if not met, the deadlines would be a costly scenario.

Vandenberg AFB is a Department of Defense space and missile testing base located near Lompoc, California. Vandenberg launches a variety of critical rocket missions for military purposes and also leases launchpad facilities to SpaceX. As you can imagine, its activities are high-profile, high-budget, and highly sensitive to delays.

When an approximate 30ft deep sinkhole opened up by the supply road, a bypass road had to be installed in order to continue launch operations until a permanent fix was designed for the culvert. When concern began to grow that a 20ft high section of the adjacent slope would slip and the sinkhole wound endanger the new bypass road and delay an upcoming $1.5 billion mission, Vandenberg sought for a temporary fix to strengthen the culvert, slope and avert disastrous and costly delays.

When Vandenberg began designing a repair, the solution was to address 1.) culvert soil stabilization and restoring usable capacity, 2.) ensuring the slope would not slip, and 3.) not impact the environmentally sensitive habitat on the slope.

For the culvert soil stabilization, the AFB determined that chemical grout would be used to stabilize collapsed sections from degrading further into the culvert. The entire culvert was to be stabilized to prevent further soil migration and seal it against further I/I, and the corroded bottom of the CMP would be restored using flowable fill. For the slope, a “wedge” injection pattern was designed to provide structural stability at the bottom of the slope and lateral stability to prevent slippage that would cause structural damage to the culvert and irreparable damage to the sensitive environment the slope supports.

“Initially, Vandenberg’s solution for the slope repair consisted of using a compaction grout to provide a dense material for slope stability,” stated Cliff Frazao, Chief Operations Officer of EagleLIFT. “When we were approached for the project we had a concern that the compaction grouting footprint could be detrimental to the environmental mission of the project and add too much weight to the area and cause further issues with the culvert. Based on these concerns, the slope “wedge” injections were rescoped to utilize a specialized formula of chemical grout that was hydro insensitive, light-weight, and highly expansive. The material’s initial permeation and structural capacity gave Vandenberg confidence in this alternative.

To meet the environmental compliance needs of the project, extensive preparations were necessary to minimize potential delays and protect endangered species that called this site their home. Some of the species included California Buckwheat, El Segundo Blue Butterflies, Tar Plants, and the Red-Legged Frogs. To ensure the endangered plant/wildlife habitat wasn’t inadvertently violated, environmentalists were onsite to pre-mark the plant life and be on the lookout for wildlife. If any of these species were disturbed or damaged, the project could have seen an immediate shutdown.

In regards to the culvert, EagleLIFT stabilized its entire 200 ft length. At the crushed joints, a 2ft injection of chemical grout created a thick arch of material and densified aggregate. The arch was designed to provide a convex, dense structural layer that would help provide structural stability and reinforcement to the crushed CMP. This would help mitigate further damage from occurring and re-establish limited drainage capacity. The remaining portions of the culvert were stabilized using a consistent gridded injection pattern. The goal here was to fill any annular voids and restore the bearing capacity of the adjacent support soils.

The terms of the project were to complete the project in a 30-day window, spanning from September 14 – October 14, 2017. The project was completed in 8 days with no delays or adverse environmental impacts. 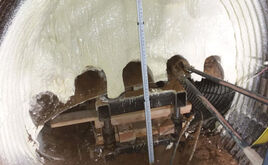 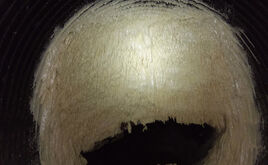 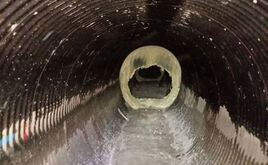