Learn about the projects EagleLIFT has been working on that includes the emergency culvert rehabilitation in the county of Santa Cruz, California. Call us today!

The Challenge: The County of Santa Cruz California was experiencing a common issue, degraded stormwater conveyance infrastructure that needed rehabilitation.
The County was evaluating the potential for relining some of their Corrugated Metal Pipe using a cementitious lining application from CentriPipe.
During a site visit, the CentriPipe representative Donald Sims noted the presence of significant voids and weakened support soils around the CMP and recommended EagleLIFT's polyurethane injection application as a solution.
The Capitola Rd Pipe is a 66inch diameter, 55ft long, badly deteriorated Corrugated Metal Pipe (CMP) culvert that showed signs of settlement and structural damage. The voids were found to be extensive, nearly 20 ft across and 20ft deep toward the surface and required void-filling and densification in order to support the culvert, roadway, parking lane, and sidewalk. To do this, EagleLIFT injected its proprietary two-part, hydro-insensitive EL003 polyurethane through the culvert and into the void area.

The EL003 geotechnical polyurethane is designed to have optimal spread and cure time, making it ideal for a combined void-filling and soil-stabilization product. Once injected, the polyurethane initially spreads in a liquid form and progressively expands throughout the void area and adjacent soils to create a highly dense soil polymer matrix.
A second area that required help was a 84inch, 163ft long CMP culvert that ran underneath the intersection of Sumner Rd and Dolphin Drive in the City of Aptos. While not as deteriorated as the Capitola Rd section, the pipe envelope was deteriorating which resulted in water infiltration and soil subsidence which ultimately led to a sinkhole effect resulting in considerable pavement settlement. 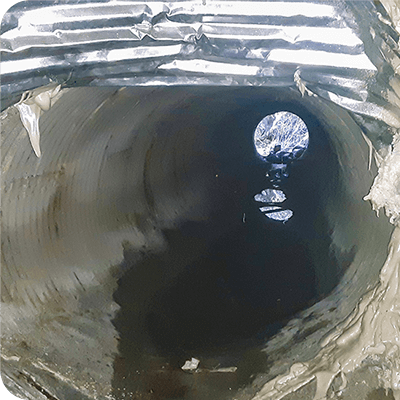 In both culverts, the initial approach was to stabilize the invert using a special high-density mortar from CentriPipe. Afterward, EagleLIFT made injections from the interior of the pipes and stabilized the annular voids. With the Capitola Rd Culvert, the focus was on the upstream end of the pipe to combat the encroaching storm season, with the longer downstream section being addressed later. With the Sumner Rd Culvert, the pipe was stabilized throughout, and EagleLIFT additionally performed injections on the surface to stabilize the pavement and realign the roadway. After the injections, the pipes were then relined using the CentriPipe Cementitious lining system.
The project was performed under an emergency contract and required minor water bypass with no impact outside the pipe, and all access for tools, piping, etc. had to be via a direct access manhole. The project was completed in 2 weeks and the soil contact was re-established with the culverts and roadway structures. The repair was just in time, as almost immediately after the project was completed the County experienced substantial rainfall which could have been disastrous to both roadways.