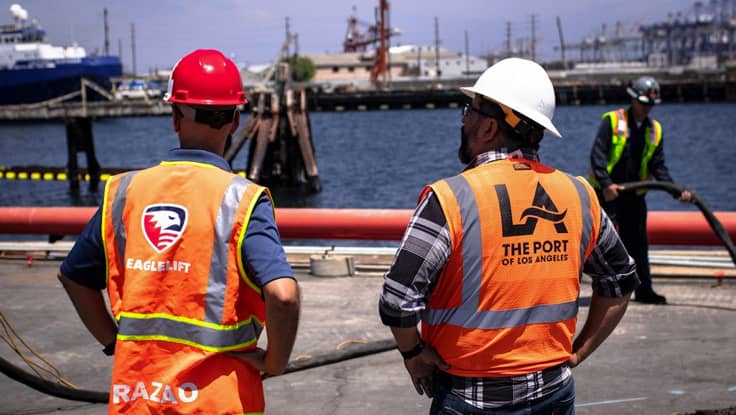 Learn more on the Latest News from EagleLift featuring many projects within the company and community including tips for foundation settlement issues!

Soil settlement has the potential to stop commerce dead in its tracks. When a section of road, highway or runway sinks, a safe working surface becomes unusable. Such damage also costs the taxpayers millions in broken axles, blown tires, and the time and taxes to rip and repour those sunken areas.

A similar disruption occurs when a foundation settles or part of a concrete slab floor breaks away and sinks into a soil depression. Whether this damage happens in a home, factory or commercial building, it demands quick attention to restore both function and safety.

Until recently, foundation repair contractors had to rely on concrete pumping or “mudjacking” techniques to fill voids beneath settled concrete slabs and push settled structural elements back toward their original elevations. But soil settlement problems often go deeper, literally and figuratively. Pumping a cement-based slurry immediately beneath the settled slab doesn’t address unstable soil at greater depths. In fact, the considerable weight of the pumped-in mortar can put more stress on weak soil at greater depths, which causes further settling.
Fortunately, EagleLIFT, Inc. repair specialists now have access to new technology that can stabilize and strengthen soil at different depths, rather than just at shallow depths. Our Deep Stratum Injection™ service offers the additional advantage of being fast, affordable, and less intrusive than other solutions.

Soil is made up of many elements and the characteristics of each element determine how suitable the soil is for different uses. The most desirable soil for load-bearing functions such as roads, runways, and building foundations contains high proportions of sand and gravel and much smaller amounts of organic and fill material. Unfortunately, construction often takes place on soil with poor load-bearing qualities. Eventually, structural elements (such as slabs, roadways and airport runways) combine with live loads (vehicles, machinery, aircraft, etc.) to exceed the load-bearing capacity of the soil, and settlement occurs.
Foundation repair specialists are often called in to deal with soil settlement issues, even when they involve roads, runways and structural elements other than foundations.

What the contractor will do:

In many cases, polyurethane injection will be recommended to restore structural integrity and help prevent future damage.

The effectiveness of our polyurethane injection process is due to the expansive reaction that takes place when the two chemical compounds are mixed together. The reaction caused by the mixing of the chemicals under the pressure of the soils is extremely strong and can support up to 5 tons per square foot.

Polymer injection can be performed directly beneath a settled structural element, or at depths of 30 ft. or more. Based on penetrometer tests that assess soil density, technicians establish an injection grid to target specific locations where the polymer must be placed. Holes are drilled in the slab or other structural elements according to the injection grid; then a length of tubing is inserted in each hole. Tubing lengths vary based on the different injection depths that have been established.

The 2-part polymer is mixed right at the injection nozzle that’s connected to the tubing. As the resin and catalyst compounds combine, a powerful chemical reaction takes place that causes the liquid mixture to expand as soon as it exits the bottom of the tube. The polymer begins its expansive foaming action as it flows into the soil. Because the expanding material naturally follows the path of least resistance, it flows and fills where it’s needed most to increase soil strength.

The polymer stops expanding as quickly as it started, hardening within a minute or so. Within 15 minutes, it has attained about 90% of its final strength. Experienced technicians can tailor this injection process to lift settled slabs and other structural elements back to their original positions, while also stabilizing the surrounding soil to prevent future settlement. Polymer injection is a practical, effective and economic way to solve a wide range of soil settlement problems.

Here at EagleLIFT, we offer polyurethane injection services for areas with soil settlement problems. For more than two decades, EagleLIFT has helped thousands of clients control soil settlement problems and pavement leveling issues with fast-acting, non-destructive stabilization, and structural lifting solutions. To learn more about how we can help your commercial or residential property, contact the team at EagleLIFT, Inc. for more information.